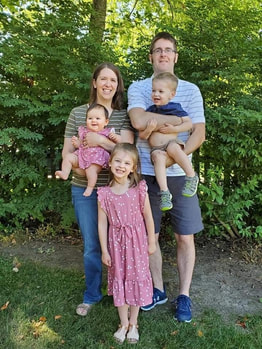 Having grown up in a Christian home in Indiana Ryan has been in church most of his life, but did not come to know Lord as Savior until he was 14. It was Oct of 2000 when Ryan accepted Christ as his Lord and Savior. He understood that he was a sinner (Romans 3:23) and needed a Savior. He trusted in Christ to save him (Romans 10:9, 13). Within the next year, the Lord began to work on Ryan to go into full-time church ministry. Ryan has completed his BA in Biblical Studies (2010) from Maranatha Baptist University (formerly called Maranatha Baptist Bible College), his MA in Biblical Counseling (2012) from Maranatha Baptist Seminary, and his Masters of Organizational Leadership (MOL) from Maranatha Baptist University (2022). During his schooling, Ryan was involved with local church ministry, missions (Argentina and Uraguay) and also in dorm leadership too. At Maranatha, Ryan had the privilege of leading a floor of the dorm (RA) for about 3 years, and the dorm for 2 years as Residence Supervisor.

Bethany trusted in Christ at the age of 4. She approached her mom about salvation, and her mom led her to Christ. Even though Beth grew up in a pastor's home, she did struggle with assurance of her salvation. While in college (sophomore) at Maranatha a friend challenged her to read through the book of Romans. By reading  through the book, she realized that her salvation was based on the work of Christ, not on what she had done. Bethany completed her degree at Maranatha and has a B.S. in Music Education (2011). Throughout college, Beth spent her summers either working at home in Montana or overseas on missions trips. She has gone over to Argentina, Uruguay, and Turkey. Bethany also had the privilege of serving as a Floor Leader (RA) for about 3 years at Maranatha. Bethany met Ryan at Maranatha and they were married December 2011 out in Montana. Ryan and Bethany moved to Muncie in May 2012 where Ryan became the College Pastor at Grace Baptist Church.

This couple has a heart-felt zeal to see college-age young people come to know Christ and be grounded in biblical principles at that crucial stage of their lives. The Gunthers also are talented musicians. Bethany accompanies the services on the piano, and both serve in the orchestra each Sunday. They have three children: Jenelle, Andy and Elliana.